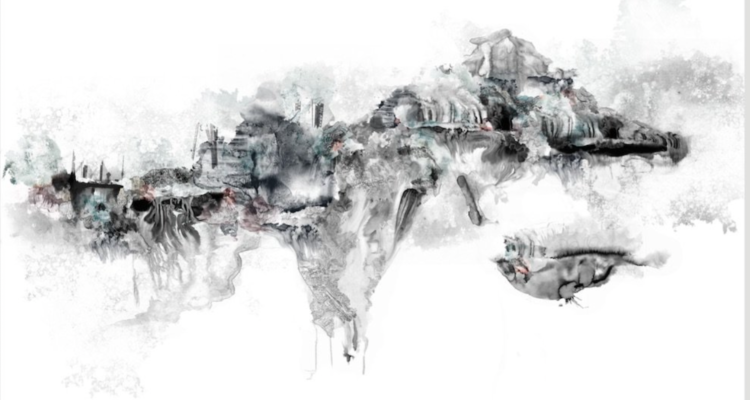 A Sense of Place

Memory, geography and cultural experiences are underlying themes explored by these three women artists. Through an innovative use of paper, maps, threads, printmaking, collage and projected imagery, the artists in the show create two and three-dimensional objects that express universal notions of belonging and association.

Brooklyn-based Tegan Brozyna Roberts combines her background in painting and sculpture with a long family tradition of working with textiles. Roberts’ works are visual manifestations of her personal experiences in urban locations – patterns, colors and hues she encounters and documents in her day-to-day activities. She scours the environment to mine unique and often overlooked colors and markings, recording the forms by rubbing certain shapes, such as cracks on the sidewalk, peeling paint on a fences or barks on a sycamore tree. Once in her studio, Brozyna Roberts cuts and hand-colors paper in the forms and palettes to echo what she has experienced, carefully collaging or weaving them through a constructed loom. Her works become abstractions referencing specific times and spaces. The show will feature a new body of work, the Doldrum Series, created in the last year during the wake of the pandemic. The term describes a calm area in the ocean that is often followed by erratic and violent storms. For the artist, the doldrums marked a time of feeling stranded in the anticipation of an approaching storm, but she was also comforted by the knowledge that the situation was temporary. The swirling movements in the Doldrum Series reflect a yearning for peace and quietude amidst uncertainty and a relentless perseverance to cultivate order in a chaotic time. Brozyna Roberts holds an M.F.A., and her work has been included in several solo and group exhibitions. She has also created large, site-specific installations, most recently for Facebook’s campus in New York City.

Urban structures and natural environments come together in the work of Simona Prives, a multi-media artist also based in Brooklyn. Prives creates digital and physical collages as well as projections that reference current and historic locations. She reconfigures maps, topographical patterns, construction plans and other imagery to create new visual terrains that are partly recognizable and partially obscured in their nebulous atmospheric compositions. The effects are dream-like landscapes with a cinematic aspect, teasing the viewer with suggested narratives that are mysterious and elusive. The artist’s process involves silkscreen, monotype and collaging found materials, and although some of her works are editioned, they are individually hand-colored, making each unique. For the show, Prives will present imagery sourced pre-pandemic when she was able to move around more freely. The ensuing period of social isolation allowed her to complete new unique collaged works and video installations, which will also be featured in the show. Prives has exhibited extensively will debut an important multi-part public video installation in New York City this August. She too holds an M.F.A, is a part-time faculty member at CUNY, NYU and Parsons School of Design and has participated in several artist residency programs.

Viviane Rombaldi Seppey hails from Sion, Switzerland, a small town close to the French and Italian borders, and has lived in Asia, Europe and the United States. Recontextualizing maps, phone books and other printed materials to reference the places she has inhabited, Rombaldi Seppey finds new ways to reflect her cultural mobility. Originally intended to document and mark locations, claim spaces, record names and addresses, the maps and phone book pages now take on new formats and meanings. Rombaldi Seppey cuts, weaves and re-assembles the printed materials as a way to investigate and explore her own notions of identity and personal diaspora. Delicately spliced and crafted works such as “Home”, a tapestry woven through 43,400 pinpoint holes with atlas and map pages, reference tangible and emotional states of being. Other works in the exhibition made out of New York City phone books take on the appearance of the city’s vertically oriented architecture. Rombaldi Seppey has an M.S. and an M.F.A., and her work has been exhibited widely in notable institutions including the Bronx Museum of Arts, New York and the Art Gallery of New South Wales in Australia. The artist currently lives and works in New York.

Registration is Open for Fall Session 2021

Time to Plan your Creative Autumn! Register for fall classes and workshops today!...

Registration is Open for Fall Session 2021

The Housatonic Museum of Art is proud to announce the opening of...