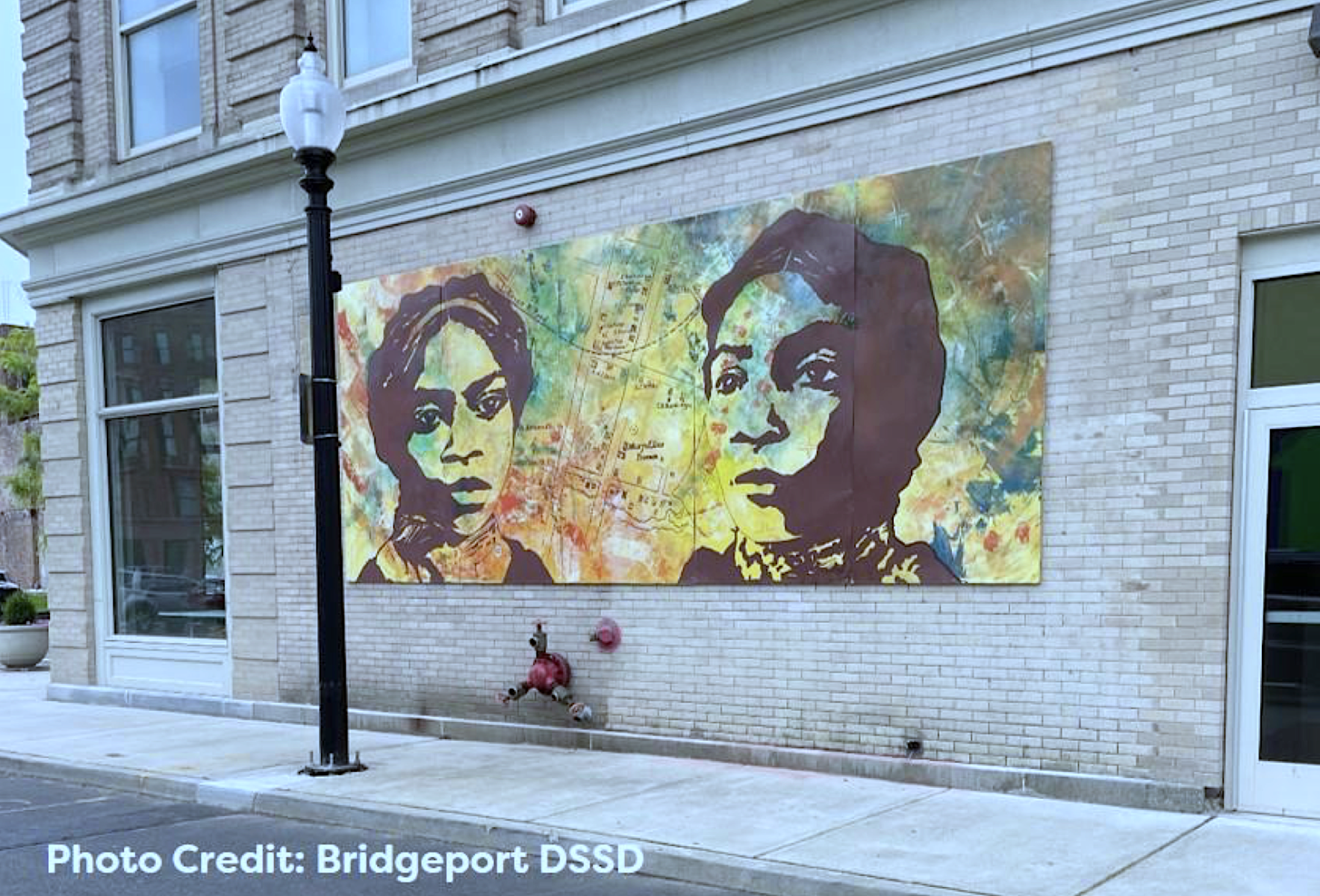 BRIDGEPORT, CT – June 7, 2021 – The Bridgeport Downtown Special Services District (DSSD) was thrilled to celebrate the success of its collaboration with The Mary & Eliza Freeman Center for History and Community and local artist Aisha Nailah to produce a public mural commemorating the legacy of Bridgeport heroes Mary and Eliza Freeman. Downtown Bridgeport is a commercial area that represents and serves a diverse tapestry of the wider Bridgeport community. The public parks and independently owned restaurants and shops that populate the street-level spaces in the neighborhood create connection points that foster the sense of community so special to the Downtown and the city. The mural unveiled on Saturday, June 5, 2021, “colored in” another corner of an emerging public art destination within Downtown Bridgeport.

The installation connects the Broad Street Steps with the ground mural at Peacock Alley, and the Arrows Weave mural located at 1163 Main Street. The mural will attract daily visitors to enjoy the improved physical setting of the space and educate them about the history and legacy of the Mary and Eliza Freeman.

Born in Derby, CT; Eliza (1805-1862) and Mary (1815-1883) Freeman were sisters, free women of African American and Paugussett ancestry, who proudly made Bridgeport’s “Liberia” their home. After leaving Derby in 1843, they lived in New York City where Mary worked as a hotel chef. In 1848, the same year Connecticut ended slavery, the sisters purchased adjoining lots on Main Street and built two modest, wood-frame houses. By 1855 both sisters occupied their homes (initially rented). Mary continued to work in Manhattan as a chef, taking advantage of rail service inaugurated in 1848. Eliza worked in the home of a local widow. They invested their earnings in real estate.

Little Liberia (c.1821) was a seafaring community of free people of color and an Underground Railroad Destination Community. It boasted Bridgeport’s first free lending library, a school for colored children, businesses, fraternal organizations, and churches. Its development boom owes much to Mary and Eliza Freeman. The eastern block of Main Street was largely undeveloped until they arrived – followed by the Duncan House Hotel which attracted a cosmopolitan array of patrons from throughout the Black Atlantic world (mentioned in a letter to Frederick Douglass).

Both sisters developed, bought & sold real estate; managed property; and financed home purchases before women had the right to vote! When Mary Freeman died the only Bridgeporter of greater wealth was P.T. Barnum. The homes of the sisters, under restoration, are listed on the National Register of Historic Places for their significance to African Americans and Women. Their story highlights Little Liberia’s legacies of freedom, entrepreneurship, and social innovation.

“The mural also commemorates and celebrates the decades of efforts by historians and residents to reincorporate the story of the Freeman sisters into local and national history. It’s a milestone and a source of accomplishment and joy,” said Maisa Tisdale, President and CEO of The Mary & Eliza Freeman Center for History and Community.

“The story of the Freeman sisters and the Little Liberia neighborhood is one of liberation, and it is significant and should be well known. I am honored to have been chosen to commemorate an important part of this city’s history, of my own black history, and women’s history. Needless to say I am inspired,” said Aisha Nailah, the artist who created the mural.

“We are so excited to support this mural in Downtown Bridgeport. This commercial and residential community radiates with diversity, and this mural project will provide an opportunity to add vibrancy, spread color and joy through public art, and add to the neighborhood’s identity making our place one of value. None of this would have been possible without our community of supporters who contributed to the Sustainable CT crowdfunding campaign. We thank each of them for their commitment to Downtown Bridgeport,” said Lauren Coakley Vincent, President and CEO of the Bridgeport DSSD.

“We’re pleased that we can provide a prominent location to display this beautiful mural and participate in telling the story of its rich history. We work closely with and support The Mary & Eliza Freeman Center for History and Community, and are happy to collaborate with them on this project,” said Kim Morque, HSW Bridgeport representative and Bridgeport DSSD Vice Chair.

The process to create the mural engaged neighborhood stakeholders to add to the growing network of murals in pedestrian plazas, creating a pathway connected by visual art through different elements of the neighborhood. The Bridgeport DSSD successfully raised $7,500 from a crowdfunding campaign supported by Sustainable CT and over 20 individual donations, including significant support from Bridgeport Generation Now, demonstrating broad support from residents, businesses, and other organizations throughout the community.