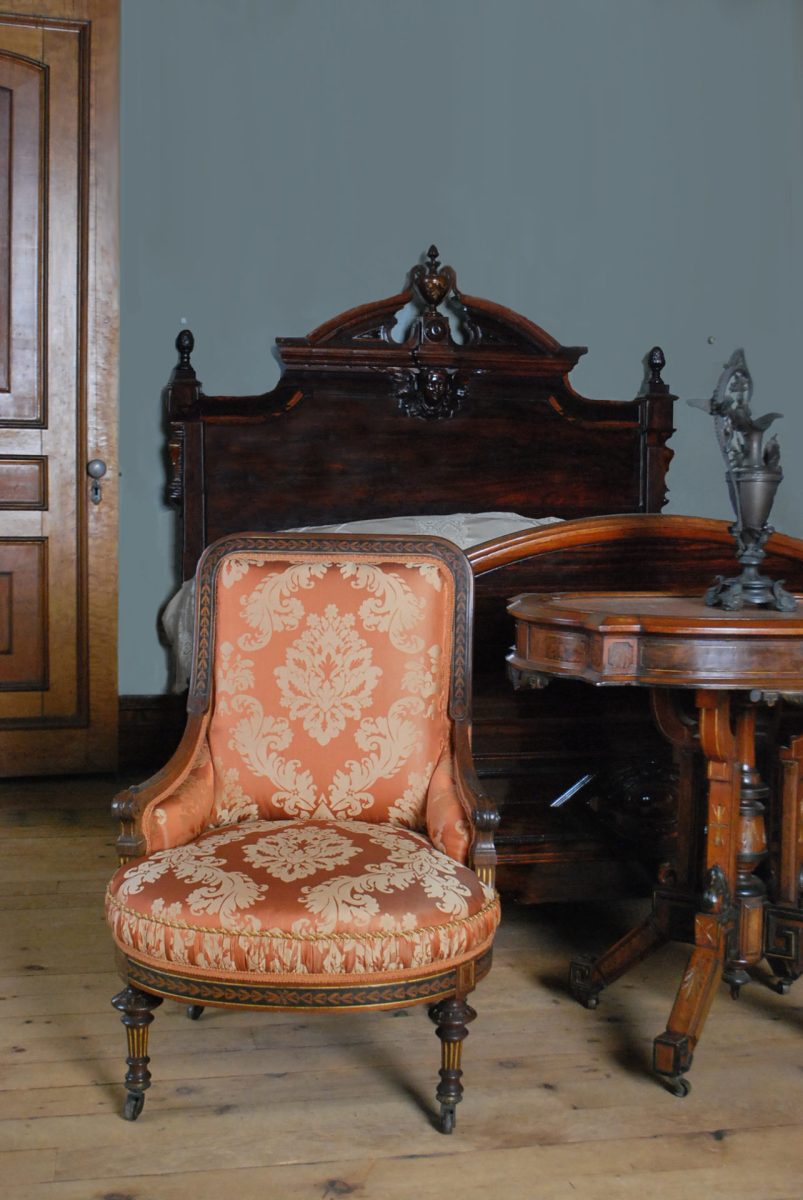 Norwalk, CT, June 1, 2021 – The Lockwood-Mathews Mansion Museum has received a donation of outstanding Herter Brothers furniture from R. Joseph Wiessinger, a collector and resident of Belleair, Florida, and frequent LMMM visitor. LMMM’s new acquisition will be displayed for viewing in the Museum’s Period Rooms.

Mr. Wiessinger has been an avid collector of Herter Brothers furniture for the past forty years, a passion that sparked when he received from his parents a walnut wardrobe from the 1870s, which they sent to him to help him furnish his first apartment. He quickly became mesmerized with the color and texture of the beautiful wood finish.

The Herter Brothers firm was founded in 1858 by two German immigrants in New York City, Gustave and Christian Herter; their company became among the most sough-after in the U.S. providing custom made cabinetry and interior decoration services.

Mr. Wiessinger said that he once acquired a Herter chair from an antiques dealer and digging into data and documents to ascertain its history and provenance, he realized: “It was from the 1879-1881 commission by W.H. Vanderbilt for his new mansion at 640 5th Avenue, in New York City. “ The Herter Brothers had designed and constructed all the furnishings for that residence. Mr. Wiessinger later donated the chair to the Metropolitan Museum and said it is on display in the American Decorative Arts rooms of the museum to accompany other Herter furniture from the same mansion.

The Lockwood-Mathews Mansion Museum has an extensive Herter Brothers furniture collection and the Herters’ woodwork can be seen throughout the house. Charles D. Mathews’ daughter, Florence, who lived at the Mansion until her death in 1938, wrote about the Herters’ furniture in her diary. The furniture described had been ordered by the Lockwoods, but they never received it due to their entanglement in the first Black Friday on Wall Street and subsequent loss of their fortune.

“The second summer,” wrote Florence Mathews, “Father found the furniture for the large drawing room. It was a curious fact that when the original furniture was designed, two sets must have been made. One sold to Mr. Lockwood to match in every detail the room for which it was intended. It was done in rosewood like the doors and with a woman’s head in each piece on a dark blue background to coincide with the heads on the canvas.”

Mr. Wiessinger said, “It has been a delight to search out and find wonderful historic pieces by high quality furniture makers and then, after enjoying them in my home, to donate to museums so the public at large can see and enjoy them as well and learn about 19th century furniture.”