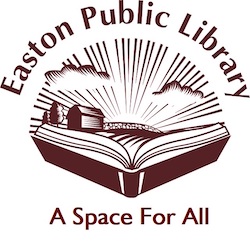 In 1933, a group of Easton visionaries voted to create a public library in their town. The Easton Public Library opened in the basement of Samuel Staples School with a budget of $200 from a state grant and $50 from the local P.T.A. In 1937, the Library had new quarters, a room on the main floor of Town Hall. The Library Board, to consist of six membersâ€”no more than three from any particular political partyâ€” with six year terms, was established in 1950. Once again, space became an issue, and the Library was moved to the basement of Town Hall where it occupied 1,125 square feet. Crowded conditions forced residents into action in 1968. A Town Meeting authorized a bond issue of $300,000 to finance an addition to Town Hall. In 1979, eleven civic-minded women met to form the Friends of the Easton Public Library. With the Friends' support, the Library began to act as a center for the whole community, offering more programs for children and adults. Fire code violations mandated improvements to the facility in 1991. The Library Board of Trustees applied to the State Library and was awarded a grant for library construction. Library Trustees championed a town-wide fund raising campaign and pledged $300,000 toward the cost of a new building. A special referendum for construction of a new Library was conducted on December 11, 1994 and passed by fifteen votes. The much anticipated new Library building opened for business on May 29, 1996. The Library became a member of the computer age when it joined reQuest, a statewide library network whereby patrons and staff can locate items in other area libraries. It also made a computer available to the public for word processing. In 1998, with monies raised by the Friends of the Library and Library Board private funds, the Library's circulation functions were automated and the oak card catalogs were replaced by on-line catalogs. The next year saw three workstations in the Library's Reference area networked to make Internet and on-line databases available to the public. In 1999, the Library received the prestigious Award of Excellence for Small Libraries from the Association of Connecticut Library Boards. This auspicious group also awarded Library Director, Bernadette Baldino, a citation for Outstanding Contribution to Library Service in Connecticut. With the creation of a web page in 2000, www.eastonlibrary.org, Library resources were made available to patrons in the comfort of their homes. In 2010, the Library began circulating downloadable ebooks and audiobooks to its patrons. While taking advantage of this new technology, patrons still come to the Library to check out materials, attend programs, use the computers, and receive technology assistance. The Library looks forward to continuing its history of growth and service, helping community members of all ages lead richer, more interesting lives by providing access to print, audio and electronic resources, hosting cultural activities, and serving as a forum for community gatherings.