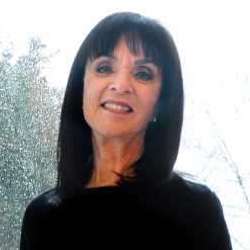 Marlene Siff was born and raised in the Bronx. She graduated from the High School of Music and Art and went on to major in art at Hunter College, where she received her B.A. and was elected to Kappa Pi, the International Honorary Art Fraternity. She writes: "I am concerned with communicating a sense of harmony, balance, order and spirituality. We are all confronted on a daily basis with the fragmentation of our non-linear lives, trying, as in a puzzle, to make the pieces fit together to make sense of it all. My paintings, works on paper, and sculpture depict imagery of personal events and psychological issues. They are expressed through geometric shapes, color, light, space, texture, edges and movement each interplaying with one another engaging the viewer to participate." "Most recently, I have embarked on a series of white paintings that abandon my signature bold palette. These paintings, from the "Elements of Peace" series, pay homage to people who have been affected by war. White is soft, quiet, spiritual, unadorned and full of infinite possibilities. My intention is to create an architectural space for rest, retreat, connection, reflection and identification. The multi-dimensionality and multi-layering of my work reference what one must uncover to penetrate the illusions of reality and reach the mystery and essence of the soul." Marlene has exhibited in museums and galleries throughout the U.S. and abroad, including the U.S. Capitol Building (2011), Columbia/Barnard University, NY (2011), Katonah Museum of Art, NY (2009), the B'nai B'rith Klutznick National Jewish Museum, Washington, DC (1998), the Aldrich Museum, CT (1992), and Galerie MusÃ©e in Nagoya, Japan (1994). Her work has been sought out by major corporate and private collections around the United States, most recently for the Nevin Welcome Center at Cornell University. She was featured in an episode of Creative Women Today, on CT Cablevision (2010), and selected to appear in Years in the Making, a documentary film by Martin West (2009).

The Schelfhaudt Gallery at Paier College