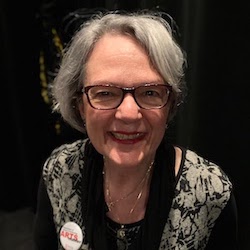 Martha Schmoyer LoMonaco, Ph.D., is Professor and Director of the Theatre Program, Resident Theatre Director and Co-Producer of Theatre Fairfield, the resident production company at Fairfield University in Connecticut, where she is also former director of the Graduate Program in American Studies and continues to serve as a member of the graduate faculty. She is an active theatre historian, writer, lecturer, and director, and past President of the Theatre Library Association, a North American scholarly organization that promotes professional best practices in acquisition, organization, access, and preservation of performing arts resources in libraries, archives, museums, private collections, and the digital environment. She is the author of two books, most recently "Summer Stock: An American Theatrical Phenomenon" (Palgrave), which was a Choice Outstanding Academic Title of 2004, editor of â€œTheatre Exhibitions,â€ volume 33 of "Performing Arts Resources" (Fall 2017), and since 2010, editor of â€œNew England Theatre in Reviewâ€ for New England Theatre Journal. She curated "Bravo! A Century of Theatre in Fairfield County," a theatre history exhibition for the Fairfield Museum and History Center (Fairfield, CT), and has curated two performance series for the Regina A. Quick Center for the Arts, "21st Century Women and Ancient Greek Tragedy" (Fall 2017) and "It's A Man's World" (Fall 2015). At the Quick, she also recently directed Simon Stephens' play adaptation of Mark Haddon's novel, "The Curious Incident of the Dog in the Night-Time," Anne Carson's translation of Sophokles's "Antigone" and Rachel Crothers's "A Man's World." She directed Shakespeare's "Titus Andronicus" in the Wien Blackbox Theatre at the Quick Center in Spring 2020. This year, she launched the new mobile bookstore at the Quick Center for the Arts, for which she serves as 2019-2020 curator. Marti received the Louis A. Rachow Distinguished Service in Performing Arts Librarianship Award in 2013 from the Theatre Library Association. She holds a doctorate in Performance Studies from New York University.

Levitt Pavilion For The Performing Arts