On August 19, 2020, The Cultural Alliance of Fairfield County announced its “Collective Action Against Racism & Inequity” Initiative – a Call to the Region’s Artists & Cultural Leaders – comprising three public conversations and a progressive series of workshops.

Thes initiative opened with three public conversations presented by Valeria and Andrea Lopez, of OnBeat Consulting. Titled “Reimagining Arts & Culture,” this series centered on examining and interrupting the dominant story in the arts and culture sector that has excluded or misrepresented Black and Indigenous People of Color.

The conversations were intended to ground participants in key terminology and theories, address how to move beyond shame, anger or guilt and invite them to engage in a framework for more inclusive and equitable change. The topics included: Race, Power and Privilege in the Arts, Empathy in Times of Crisis, and Moving From Empathy to Action.

The schedule was as follows:

This conversation addressed key concepts such as race, privilege, and systemic racism – especially as it relates to arts and culture. Through small and large group discussions, we explored the role privilege plays in shaping the stories we tell about our history and the current movement.

Having increased our understanding of the current racial pandemic, how do we move beyond feeling overwhelmed, guilty or ashamed? In the second session, we examined morality, empathy, and racial identity as we continued our journey to anti-racism.

Our closing conversation identified tangible ways to respond to and begin dismantling racism in the arts. We discussed key principles to keep in mind as we take action and share best practices.

The series was designed for independent artists, organizations that promote the arts, culture and creative expression, and community members interested in learning about the intersection of the arts and the national movement to dismantle racism in America.

The conversations were designed to help the audience understand and advance the national conversation on race and racism, while inviting them to be a part of the movement by taking individual action grounded in an expanded awareness of the issues. It filled a community need to participate and respond meaningfully to the current reckoning with regard to race and other prejudice and bias. 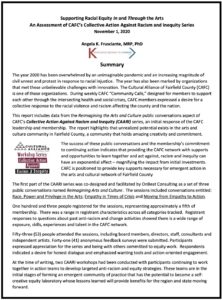 An Assessment of the Conversation Series, “Supporting Racial Equity In and Through the Arts,” by Angela K. Frusciante is available here.

The workshop series, organized around the public conversations, provides working sessions designed for our member artists, organizations, their staff and board members, who have committed to undertake specific action(s) against racism and inequity. The working sessions, grounded in equitable structure and processes, are organized in three “progressions” (see below), which incorporate peer collaboration, additional resources, and consulting support.

Participation has involved personal reflection, mutual learning, peer and professional support, and the achievement of specific, self-determined action(s) that measurably eliminates the pervasive racism and inequities in our personal and organizational lives and activities.

The CAARI Community of Practice has included more than 20 participants representing staff and board members of 11 organizations and several individual artists. Participants have pledged to:

● Sharpen their awareness of their unique context;

● Give and receive peer support;

● Determine what they can do, with peer and professional help to do it, if needed;

● Undertake specific action(s) to eliminate instances of racism in their individual and/or organizational lives;

● Commit to integrating this work and its ways of being in everything they do.

The goal of the first three sessions was to identify a particular starting point and direction. These two meetings were full-group virtual explorations and discussions and initiated the CAARI community of practice.

The first convening (Sept. 17, 2020) conducted reflection on personal/organizational context and asked participants to determine their questions, aspirations, and the changes they seek.

In the second and third convenings, following the second and third public conversations,  participants self-organized into collaborative working groups according to interest and affinity. Some participants have chosen to work individually but have committed to reporting back to the group with updates and learning. Working groups were encouraged to adjust as the process advances.

The goal of the second “progression” has been to establish and delineate individual action. Working groups have established their own meeting schedules and committed to cooperatively support one another and to complete their self-determined action(s). Working individually (with peer support), participants have begun to outline and prepare individual action(s), will present their action plan to their peers (with a timeline and budget as needed), and regularly report back with questions, resources found and needed, and will provide peer support. CAFC has provided outside resources (we just completed two Three Horizons Planning Workshops), facilitation as needed, plus peer and professional leadership.

The goal of the third “progression” is for the CAARI Community of Practice to stay connected and informed as they undertake their individual actions. Participants will evaluate their progress, regularly communicate outcomes and what they have learned, and commit to meet via small group or large group check-in sessions. It is CAFC’s goal to publish all outcomes and learning in agreement with the participants. The CAARI initiative’s evaluation and collective learning is supported by Angela Frusciante of Knowledge Designs to Change.

See our page of CAARI Resources

Celebrating passion for the arts and dedication to education