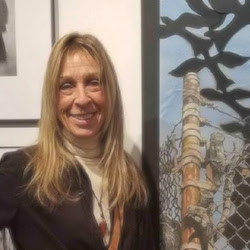 Barbara is an honors graduate and holds a BFA from the School of Visual Arts, NYC. Her formative years were spent in New Jersey and Vermont with independent study travels to Europe, South America and the United States. Barbara's career as an established and respected artist began in 1984. In that same year, she founded GB Studio in Westwood, New Jersey where she created large and small scale sandblasted, carved glass pieces for residential, commercial, public and gallery venues. Her award-winning glass work is found in numerous private collections throughout the world. She has been cited in multiple trade publications and has been a contributing artist in books on the art of carving glass. Barbara's work evolved into folded paper embossing, using her carved glass work and found objects as her moulds. The randomly folded softness of her embossments is diametrically opposed to the hard surfaces of her glass work. The subtle images in her embossment series appear as a whisper, to be listened to and viewed intently. Pastel is another medium that Barbara has mastered. Her distinctive application of soft pastels to raw canvas creates rich, textured images. She has taught this technique in workshops at the Northern New Jersey Art Center and has also instructed multi-media art classes to bring the love of art to children. In 2017, a new chapter in Barbara's life and art began with a move to Redding, Connecticut, where her home and studio are surrounded by bucolic beauty. Her lifelong inspiration is nature in all its simplicity, complexity and majesty. Barbara has expanded her current work to encompass varied mediums; graphite, colored pencil, ink, pastel, acrylic paints, fiber and found objects. Working with these colorful and tactile mediums, the visions that continue to come from her evolutionary process, her path through life and the natural world, emerge. â€œThere are moments in our livesâ€¦â€¦â€¦â€¦when we seem to see beyond the usualâ€ -- Robert Henri Barbara' recent work includes a Fiber Art Series; pastel on raw canvas with manipulated threads and her Colorplay Series; color studies using acrylic on repurposed cardboard packing material. Her current works-in-progress; nature drawings -focusing on trees- in graphite, colored pencil and ink are the epitome of realism. Barbara's hope is that her art moves the viewer to ponder its meaning and enables them see, through her eyes, some of Nature's beauty that they might otherwise fail to notice.

Friends Of The Fairfield Public Library