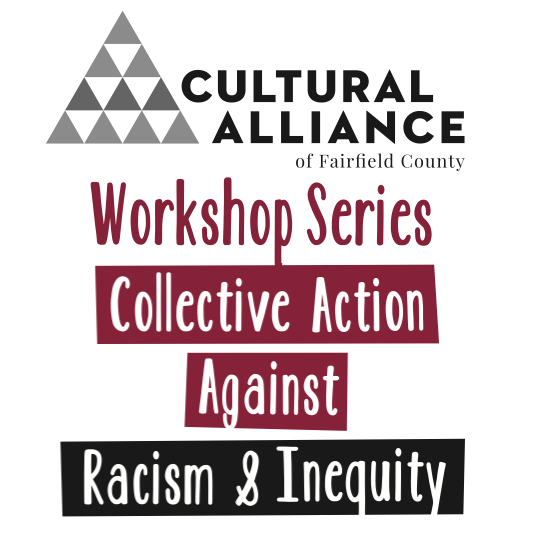 Collective Action Against Racism & Inequality (CAARI) is an initiative created by CAFC, with direct input and feedback from our members, to respond collectively and meaningfully to racism, racial violence, and the ramifications of bias in our individual and organizational lives.

A series of working sessions, or workshops, began Sept. 17, 2020, to assist participants move from personal reflection, through mutual learning, peer and professional support, and the achievement of specific, self-determined action that measurably eliminates the pervasive racism and inequities in our personal and organizational lives and activities.

The resources laid out here are gathered from our session leaders and participants.

The Cultural Alliance of Fairfield County is very grateful to the Lundberg Family Foundation for its support, and to funds from the Connecticut Office of the Arts that were able to be used to make this important initiative possible.

“A working document for scaffolding anti-racism resources. The goal is to facilitate growth for white folks to become allies, and eventually accomplices for anti-racist work.” (updated 6/12/20)

Racial Equity Toolkit and Municipal Checklist
This publication by the Connecticut Conference of Municipalities outlines recommendations in how to achieve a more representative local government – as well as opinion pieces, articles, and recaps of the work done in conjunction with municipalities.

“Why Diversity, Equity, and Inclusion Matter for Nonprofits.” National Council of Nonprofits. This DEI resource page includes numerous links to helpful resources for nonprofit organizations and general resources regarding use of language, practice pointers, and a variety of toolkits. 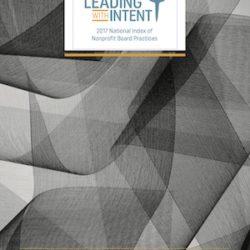 Dear White American Theatre
“In reaction to civil unrest in our country, we—Black, Indigenous and People of Color (BIPOC) theatremakers—formed a collective of multi-generational, multi-disciplinary, early career, emerging and established artists, theater managers, executives, students, administrators, dramaturges and producers, to address the scope and pervasiveness of anti-Blackness and racism in the American theater. Our response was to draft a strong testimonial letter, ‘DEAR WHITE AMERICAN THEATER’, collectively crafted by theatre-makers from across the country, exposing the indignities and racism that BIPOC, and in particular Black theatre-makers, face on a day-to-day basis in the theater industry.”

Video: All That We Share,
TV2 Denmark Advertisement, (3 mins)

Reading / Stanford Social Innovation Review: Risks for the Future We Want, Mekaelia David.
Philanthropists must learn from protesters and reimagine the formula for making change on racial justice.

Racial Justice Toolkit /In Our Back Yard  (IOBY–crowd funding site):
We made this toolkit with help from our friends and community in Cleveland to help you pick up the torch of racial justice.From case studies, to webinars, to tips for starting your own project, our Racial Justice Toolkit has the building blocks you’ll need to get started doing the work.Of course, there is a LOT that we don’t cover and couldn’t possibly cover.So, think of this guide as just a starting point, and add to it from the many, many resources out there and the many leaders doing racial justice work across the country—and the world.  We’ve included a series of links where you can start your own research, but remember that everyone’s racial justice journey will look a little different.

TED Talk: Who am I? Think again. Hetain Patel
How do we decide who we are? Hetain Patel’s surprising performance plays with identity, language and accent — and challenges you to think deeper than surface appearances.  A delightful meditation on self, with performer Yuyu Rau, and inspired by Bruce Lee. (9:03)

Reading / The Atlantic, Who Gets to Be Afraid in America?
Americans don’t see me, or Ahmaud Arbery, running down the road—they see their fear.  Ibram X. Kendi (short read)12 May 202 0

Reading / The Grounding Virtues of the On Being Project
(Engaging others in a deeper way begins with inner work — grounding virtues before ground rules).  This one-page document is a resource of On Being’s “The Civil Conversation Project.”  On Being is a nonprofit media and public life initiative that broadcasts on public radio and provides podcasts via their website.

TED Talk: A letter to all who have lost in this era. Anand Giridharadas
Summer, 2016: amid populist revolts, clashing resentments and fear, writer Anand Giridharadas doesn’t give a talk but reads a letter.  It’s from those who have won in this era of change, to those who have, or feel, lost.  It confesses to ignoring pain until it became anger.  It chides an idealistic yet remote elite for its behind-closed-doors world-saving and airy, self-serving futurism — for at times worrying more about sending people to Mars than helping them on Earth.  And it rejects the exclusionary dogmas to which we cling, calling us instead to “dare to commit to the dream of each other.”(17:26)

TEDx Antioch: What I am learning from my white grandchildren–truths about race. Anthony Peterson
This talk was given at a local TEDx event, produced independently of the TED Conferences. Are we in a post-racial society?Do we want to be? Anthony Peterson, an African American, draws from current research and from conversations with his Anglo American grandchildren to address truths about race in 21st century America.

Reading / Essay / White Privilege: Unpacking the Invisible Knapsack.
Peggy McIntosh McIntosh is associate director of the Wellesley College Center for Research on Women. This essay is excerpted from Working Paper 189, “White Privilege and Male Privilege: A Personal Account of Coming to See Correspondences through Work in Women’s Studies” (1988)

Podcast: The Heart Is the Last Frontier,
On Being with Krista Tippett – Isabel Wilkerson, November 17, 2016 (52:11 minutes)
Go to the doctor and they won’t begin to treat you without taking your history — and not just yours, but that of your parents and grandparents before you.  Pulitzer Prize-winning journalist Isabel Wilkerson points this out as she reflects on her epic work of narrative non-fiction, The Warmth of Other Suns.  She’s immersed herself in the stories of the Great Migration, the diaspora of six million African Americans to the north of the U.S. in the 20th century.It’s a carrier of untold histories and truths that help make sense of human and social challenges newly visible at the heart of our life together. Isabel Wilkerson won the Pulitzer Prize for her work as Chicago Bureau Chief of The New York Times and was awarded the National Humanities Medal by President Obama in 2016. Her book The Warmth of Other Suns: The Epic Story of America’s Great Migration won the National Book Critics Circle Award for Nonfiction.

TED Talk: Broken English. Jamila Lyiscott
Jamila Lyiscott is a “tri-tongued orator;” in her powerful spoken-word essay “Broken English,” she celebrates — and challenges — the three distinct flavors of English she speaks with her friends, in the classroom and with her parents.  As she explores the complicated history and present-day identity that each language represents, she unpacks what it means to be “articulate.” (4:25 mins)

TED Talk: How to overcome biases? Walk boldly toward them.  Vernā Myers
Our biases can be dangerous, even deadly — as we’ve seen in the cases of Michael Brown in Ferguson, Missouri, and Eric Garner, in Staten Island, New York. Diversity advocate Vernā Myers looks closely at some of the subconscious attitudes we hold toward out-groups. She makes a plea to all people: Acknowledge your biases. Then move toward, not away from, the groups that make you uncomfortable. In a funny, impassioned, important talk, she shows us how. (17:48 mins)

Reading / Why James Baldwin’s Words Are More Powerful Than Ever. AnOther Magazine Online
“Everything now, we must assume, is in our hands; we have no right to assume otherwise.” At a time for protest and introspection about each of our own racial biases, we look back to the searing words of black American author James Baldwin.

Reading / Black and Brown People Have Been Protesting for Centuries. It’s White People Who Are Responsible for What Happens Next. Savala Trepczynski
Trepczynski is Executive Director of the Center for Social Justice at UC Berkeley School of Law. Her book about race, gender, and the body will be published by Simon & Schuster in 2021.Published in Time.com, June 1, 2020, 1:32 PM EDT

Kendi, Ibram X. (2019). How to be an Antiracist.New York, New York, One World/Imprint of Random House. 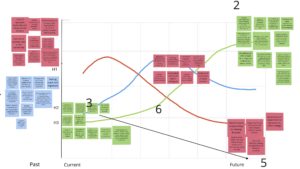 2. Recording of the Growth of the Above Grid (click for video) 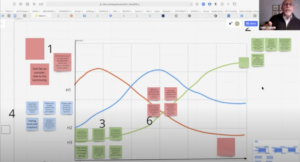 The video above presents a virtual Three Horizons Planning Workshop, which uses one of the CAARI participating organizations (Project Music) as an exemplar through the six-step process. Other CAARI participants join in the conversation as everyone debriefs together. The Three Horizonprocess focuses on multiple points of view and their interactions over time.