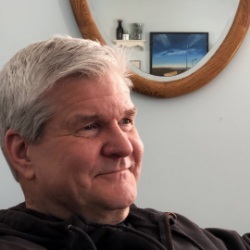 Scarpantoni's Art Studio, Spring Valley, New York, is alive with it's night class regulars. A couple of bankers, a CPA, a few teachers, some local shop owners, all painting feverishly away. In the midst of all this, sits a ten year old kid, still wearing his Little League uniform, covered with pastel chalk and dirt from a play at the plate earlier in the day. Welcome to the polarizing world of a young Steve Magee. Thanks to a knee injury, the baseball career came to an abrupt end, but the art career began to take off. Syracuse University was the new destination. Graphic arts and communication was the curriculum. Four years later, he graduated with a BFA and a world of potential. Fast forward thirty years, Advertising Art Director/ Creative Director/ Graphic Designer Steve Magee, had garnered every award in the business, and left his distinct mark on clients ranging from the Fortune 500, to friends opening a new local restaurant. Equally adept in print and film, creating simple, graphic, unexpected solutions, became the trademark of his ads. In 2005, he made the radical decision to switch career gears, leaving the Ad business and getting his license as a General Contractor, building luxury homes over the next 10 years. He was attracted to the individual freedom it offered to create and build homes from scratch. While Real Estate Development appealed to his love of architecture and design, he found himself longing for the art world of his youth. The time had come to express his creativity in what he considered to be the purest medium, oil painting. In the Summer of 2017, he discovered Silvermine Studios in New Canaan. Took a one day oil painting class with Artist Alex McFarlane, and he was hooked. Many paintings later, his visual awareness has never been at a higher level.