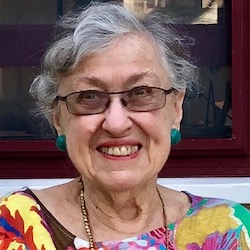 Carol Nipomnich Dixon, a native of Brooklyn. has lived in Greenwich, CT, since 1972. She has a BA from Vassar College Phi Beta Kappa, MA from Columbia U., and studied art at Pratt Institute and the Brooklyn Museum Art School. Reuben Tam and Leo Manso were among her most influential teachers. Since 2006, she has been teaching a Drawing Course through Stamford's Adult Education Program and a Collage/Mixed Media and a Critique Course at the Greenwich Art Society Studio School. From 1976-2005, she taught at Greenwich Academy, where she chaired both the Arts and History Departments. Among the courses taught there were AP Studio Art, AP Art History, and an architecture elective. She also served as a visiting artist at many public schools. Prior to that, she taught at Hunter College High School and Erasmus Hall High School. A Lifetime Artist Member of the Silvermine Guild of Arts, she has served as juror and curator for area exhibitions. She is currently President of the Connecticut Pioneer Branch of the National League of American Pen Women and is on the Boards of the Greenwich Art Society and the Art Society of Old Greenwich. She is also a member of the Stamford Art Association and Connecticut Women Artists. She is on the Public Relations Committee of the National Association of Women Artists. She has had thirty solo artist exhibitions, and her works have appeared in many galleries, museums, art centers, libraries, private collections , and corporate headquarters including American Brands; Continental Forrest Industries; Dictaphone, Pitney Bowes; F.D. Rich, Corp.; Dowling Group; Union Trust Bank; and Smith, Hinchman, & Grylls Assocs Architects. The recipient of numerous local, regional, and national awards, most recently she received The Fiber Art Award at the Greenwich Art Society's Annual Juried Exhibition at the Flinn Gallery in Greenwich, CT (2015); First Place, Mixed Media, at the Art Society of Old Greenwich Spring Show at the Garden Education Center (2015); First Place Prize at N.A.W.A.'s â€œSmall Worksâ€ Exhibition (2014); a Juror's Selection Award at the Carriage Barn's â€œSmall Works Exhibitionâ€ (2014); an award at the National League of American Pen Women's 2012 Biennial Juried Exhibition held at the Sumner Museum in Washington, DC; a $200 Merit Award at the Greenwich Historical Society's Exhibition â€œNew Century New Eyeâ€; the 2013 Nelda Howell Award from the Greenwich Art Society; and First Place Awards at the Art Society of Old Greenwich's Sidewalk Show (2013) , Byram Shubert Library Exhibition (2014), and Flinn Gallery Exhibition (2014). She has been listed in Two Thousand Women of Achievement; Who's Who in America; Who's Who in the East; Who's Who in American Women; Who's Who in American Education;and Art In America Annual. She creates art because she loves to do it, even when struggles are involved. She has been drawing, painting, photographing, and experimenting with mixed media since she was a child. She likes to think that the child in her still appears in her art, along with more mature "soul" ,feeling, intelligence, and often wit, expressed in large part through color, texture, shape, and composition. For her, art needs to convey a personal, original point of view, along with its strong visual elements and well-executed techniques. The work she creates attempts to capture her reaction to the world around her. Her inspiration comes from her own experiences and emotions, nature, places visited, varied cultures, historical eras, and art over the ages -- ranging from Ming Dynasty squares to paintings by Klimt, Kandinsky, and Krasner. While she paints in oil and creates color photographs, her most characteristic pieces are her mixed media embroidered collages. The influences for those works go back to her Russian paternal grandparents -- her grandmother who taught her to embroider and her grandfather who gave her fabric remnants from his tailor shop.