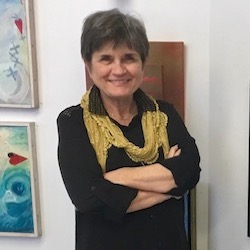 Lina Morielli was born in Montreal, grew up in Darien, CT and is a graduate of Parsons School of Design. She has been drawing, making collages and building things since childhood. As an artist/arts activist she has been in involved in many aspects of the local art scene in the Stamford since 1987. She was president of Stamford's Loft Artists Association and received three City Arts Partnership Program grants to produce their Annual Open Studios and Performance Series. Her New York city career (1970 -2000) ranged widely from designing and editing crafts for Woman's Day and Family Circle Magazines, to developing craft promotions for the industry. Her craft design work is included in such books as Better Homes and Garden's Christmas Craft Collection, The Kid's Craft Treasury, which she also edited and Cynthia Hart's Scrapbook Memories where she also served as special projects editor. Her knit and crochet designs have been featured in Vogue Knitting, McCalls Patterns, to name a few, and she also created exclusive designs for the Lion Brand Yarn Company and E.I DuPont Craft Center. Morielli also developed How-To continuity series for craft publications and many of her designs were syndicated in media across the country. Over the years Lina has received grants to create and teach after school and summer camp art enrichment programs for the I Have a Dream Foundation and the Yerwood Center in Stamford and has also offered TV/video production workshops for high school students. She has staged art workshops at corporations, art organizations and privately in her studio as well as produced and directed â€œArt in the Community,â€ a video documenting the Stamford art scene. For over15 years she has curated art exhibits for the Mayor's Gallery in Stamford featuring the work of local artists as well as community organizations offering art programs. She was a creative organizing force in establishing and curating exhibitions at Stamford's Old Town Hall Museum and was a member of the founding committee for the art gallery at UCONN Stamford. In 1987, after twenty years in New York, Morielli moved to Stamford and returned to making fine art while she continued to freelance as a designer and editor in New York. She created wood and metal assemblages, including her signature wrapped metal hearts that are included in over 100 private collections across the country. This award winning work has been exhibited in many local venues with solo exhibits in Los Angeles at the Liz Blackman Gallery, in New York at the American Craftsman Gallery and in Hartford at the State Capital. She has exhibited at the Bendheim Gallery in Greenwich, 22 Haviland Street Gallery in Norwalk, the Blue Door Gallery in Yonkers and the Upstream Gallery in Dobbs Ferry, NY, among others. Her work is also on permanent display at the State Superior Court House in the jury selection office, the Heart Institute, at the Tully Health Center, and the Critical Care unit at Stamford Hospital; all chosen as part of the Connecticut Commission on the Arts, One Percent for Art program. Her work is on exhibit in the public rooms of the Governor's Mansion in Hartford, CT and has also been selected for the permanent collections of Yale Medical Center/Bridgeport, CT, the new Stamford Hospital and most recently Sacred Heart University, College of Education and Healthcare.