The Cultural Alliance’s monthly SPOTLIGHT ON ARTS & CULTURE live on-air interview program is broadcast monthly at noon on the 2nd Monday of each month on community radio station WPKN 89.5FM, based in Bridgeport. Broadcasts are also available as podcasts via SoundCloud. Click on the following titles to hear the programs. 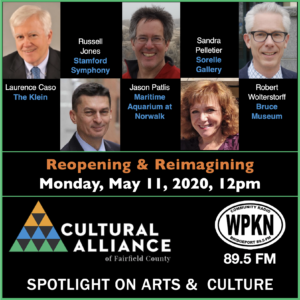 Reopening & Reimagining: Strategies for the Future

In light of the increasing flurry of discussions about reopening cultural institutions as we believe we are beginning to emerge from the COVID-19 crisis, hear this panel discussion among leaders of five Fairfield County institutions about their thoughts and plans for re-opening and re-imagining their operations after the COVID-19 restrictions and fears.

Join Laurence Caso, Executive Director of The Klein, Bridgeport, Russell Jones, President and CEO, The Stamford Symphony, Jason Patlis, President & CEO, The Maritime Aquarium at Norwalk, Sandra Pelletier, owner, The Sorelle Gallery, New Canaan, and Robert Wolterstorff, The Susan E. Lynch Executive Director and Chief Executive Officer of The Bruce Museum. What are their thoughts and plans for phased reopening? How has fundraising planning adapted to the current and imagined future scenarios? How has digital programming affecting their ideas about future programming? 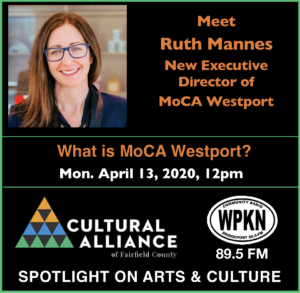 Meet Ruth Mannes, the new Executive Director of MoCA Westport (formerly the Westport Arts Center) on our Monday, April 13th edition of  Spotlight on Arts & Culture. With its roots in the Westport Artists group that formed in 1947, the Westport Arts Center was born 50 years ago in 1969 as The Westport-Weston Arts Council. After several temporary homes it landed in 2002 at Riverside Avenue across the Saugatuck River from the Westport Library. After 17 years in that location, it re-grouped as MoCA Westport and moved into the handsomely renovated former TV studio of Martha Stewart just across the Norwalk border at 19 Newtown Turnpike, close to The Merritt Parkway. Ruth Mannes is a long-time Westport resident, very active with Westport schools on the PTA executive board, and with her husband, a very active art collector in her own right. Hear her ambitions for this new institution that, as it has moved out of downtown Westport, seeks to re-connect with Westport artists, other Westport institutions and the wider community. 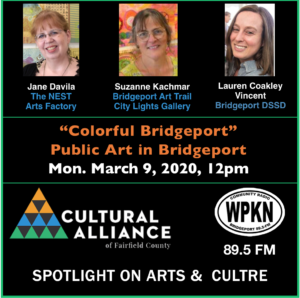 On our March SPOTLIGHT podcast, hear Jane Dávila, Managing Director of the Nest Arts Factory, Suzanne Kachmar, Executive Director of the Bridgeport Art Trail and City Lights Gallery and Lauren Coakley Vincent, President and CEO of Bridgeport Downtown Special Services District discuss the new “Colorful Bridgeport” campaign to bring color and life to downtown Bridgeport through the arts, more public art and public art activities. There’s a real push to bring the arts into the streets, and into storefronts. Hear the genesis of this campaign, and what’s in store for Bridgeport from a team of dedicated artists, nonprofits and entrepreneurs. 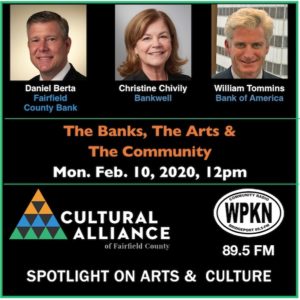 The Banks, The Arts & The Community

Our February SPOTLIGHT explored “Banks, Arts & Culture and Community” – looking at the changing role of banks in supporting the arts, culture and community development. As banking becomes more an online activity where do banks fit into the local community? How different are they than other businesses when the arts look for support and for partners? We meet representatives of three different banks: Dan Berta, President, Fairfield County Bank; Christine Chivily, Executive Vice President/Chief Risk & Credit Officer, Bankwell Financial Group; and William Tommins, Market Executive-Commercial Banking, Southern New England at Bank of America Merrill Lynch., to hear what’s new in their support of the communities where they are placed. What are some great examples of the projects they support? How should you approach your local bank to partner in a project or to help your organizations? 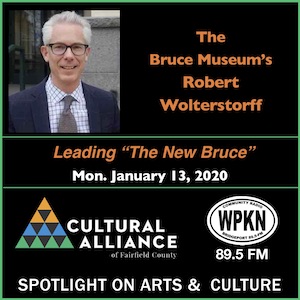 Meet Robert Wolterstorff, the recently appointed Susan E. Lynch Executive Director and Chief Executive Officer of Greenwich’s Bruce Museum. He was appointed in June 2019, just as this venerable art and science museum began its $60 million complete overhaul that will more than double its floorspace, adding education and community spaces and significantly expanding its space for permanent and temporary installations of art, science, and natural history exhibitions.

Wolterstorff is an art and architectural historian (MA from Williams, PhD from Princeton) with a passion for both Victorian design and contemporary art. He has a history of successful turnarounds of institutions – most notably the Victoria Mansion in Portland, Maine, (1998-2010) and Bennington Museum, Vermont (2012-2019), where he radically increased attendance through groundbreaking exhibitions (Milton Avery’s Vermont, Grandma Moses: American Modern) and created the Bennington Modernism Gallery to highlight the achievements of the circle of now-famous abstract painters and sculptors associated with Bennington in the 1960s: Helen Frankenthaler, Kenneth Noland, Jules Olitski, Larry Poons, David Smith, Tony Smith, and Sir Anthony Caro. Hear about his career trajectory and what he will bring to “The New Bruce.” 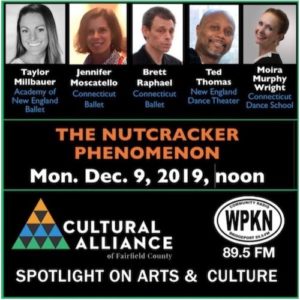 In December we explored The “Nutcracker” Phenomenon.

This time of year our dance companies and dance schools explode with their many various productions of, arguably, the most popular ballet anywhere. What’s so special about this ballet? Does it pull in audiences who normally wouldn’t attend ballet? Do these performances help build the audience for dance? 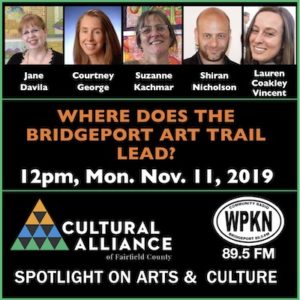 Where Does the Bridgeport Art Trail Lead

The Bridgeport Art Trail is the biggest celebration of the arts in Fairfield County, stretching over four days, attracting more than 4,000 visitors to over 40 venues in every neighborhood of the city. The 11th edition of the BAT happened Nov. 9-12.  Hear Susanne Kachmar (City Lights Gallery), creator of the Art Trail, and her partners Jane Davila (NEST Arts Factory); Courtney George (Cohen & Wolf); Shiran Nicholson, (Nicholson Events and The Knowlton); and Lauren Coakley Vincent (Bridgeport Downtown Special Services District) discuss how it went, what the highpoint were, what was new, what the impact of the Arts Trail is on the City of Bridgeport and its arts, cultural, community and economic life – and and how this will continue to evolve with new partners, new program ideas and new prospects. 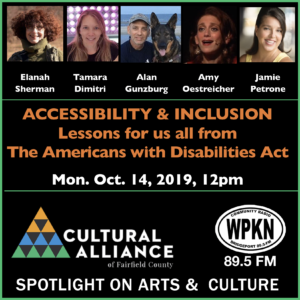 Accessibility & Inclusion: Lessons For Us All from The Americans with Disabilities Act

This broadcast brought both a broad and in-depth discussion about Accessibility & Inclusion in the Arts – specifically rooted in issues around arts venues and arts organizations making accommodations for people with disabilities. The discussion is an outgrowth of the ADA Principles and Practice Workshop conducted by Elanah Sherman for the CT Office of the Arts. The discussion brought together Elanah, Tamara Dimitri from the Office of the Arts and the three guests on the workshop describing their experiences and recommendations as people with disabilities working with arts organizations: Alan Gunzburg, Amy Oestreicher and Jamie Petrone. 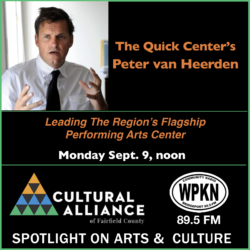 Our September show brought the director of Fairfield University’s Regina A. Quick Center for the Arts, Peter van Heerden, into the spotlight. Peter, approaching his fifth anniversary leading the region’s flagship performing arts center, introduces himself and the relevance of his own performance background in developing a dynamic and catalytic  center that is continually shaking things up. From multi-level and multi-disciplinary engagement with students, faculty and departments at the University, to exciting programs working with local schoolchildren in their classrooms and in workshops at the Quick, Peter explains how the arts have a responsibility to unsettle and change the way we think. 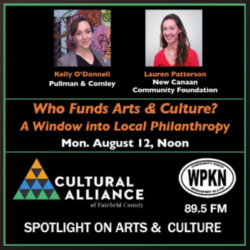 Who Funds Arts & Culture? A Window into Local Philanthropy

In “Who Funds Arts & Culture? A Window into Local Philanthropy,” we spoke with Lauren Patterson, Executive Director of the New Canaan Community Foundation, and Kelly O’Donnell, with the law firm of Pullman & Comley, about how both organizations fund arts and culture in their communities across Connecticut. What issues factor into their decisions about what to fund and what processes do they use to come to decisions? Hear their fascinating ideas about what makes a community and how both funders encourage collaboration by their grantees and collaborate themselves with other funders to produce exponential results. 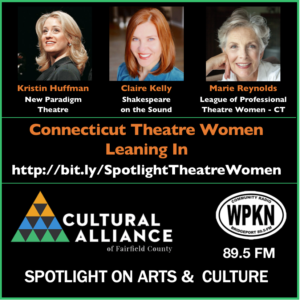 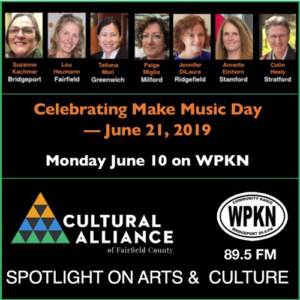 June 21, the summer solstice, was Make Music Day – celebrated the world over with musicians, amateur and professional, pouring into the streets, parks, amphitheaters, stoops, porches and more to celebrate the power of music to communicate – and have fun. In our region alone, eight towns celebrated Make Music Day, and we interviewed 7 of the 8 organizers: Suzanne Kachmar, Bridgeport; Lou Heumann, Fairfield; Tatiana Mori, Greenwich; Paige Miglio, Milford; Jennifer DiLaura, Ridgefield; Annette Einhorn, Stamford; and Colin Healey, Stratford. All engaged in a lively discussion about why they were doing this and what the highlights promised to be. Listen to the conversation (count how many pianos you hear about) and enjoy the music clips the guests brought with them. 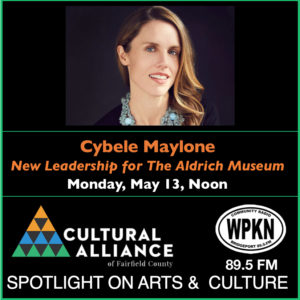 New Leadership for the Aldrich Museum

In this interview David Green introduces  the new, dynamic young leader of The Aldrich Contemporary Art Museum in Ridgefield, Executive Director Cybele Maylone. Find out her background, her strong relationships built up with artists at apexart, The New Museum and UrbanGlass in New York, discover some of her core beliefs, and where The Aldrich might be heading under her new leadership. 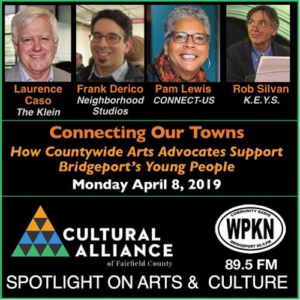 Fairfield County ranks first in income disparity among the 100 largest U.S. metro areas. In a state with no county government to ameliorate wide disparities, how do the wealthier towns help out the more troubled? There are many arts organizations based in Bridgeport that have residents of other towns on their Boards. How are other towns supporting Bridgeport – and in particular its young people? In this program, hear from three of many organizations who do this (Neighborhood Studios, Connect-Us, and K.E.Y.S.) and one place where many of them gather (The Klein). 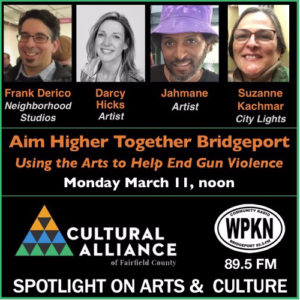 The March Spotlight presents a campaign to use the arts to help end gun violence in Bridgeport and Fairfield County: AIM HIGHER TOGETHER BRIDGEPORT. This collaborative initiative (inspired by a national campaign led by TOMS), uses art and murals to share a message of hope, education and activism, led by youth, to save lives and promote gun safety. Partner organizations include: BLENDS gallery, Bridgeport DSSD, Bridgeport Generation Now, City Lights Gallery, Neighborhood Studios, SOURCE coffee, The Gale Heilmann Family, and UnLoad Foundation. Coming up is a celebration and fundraiser at Bridgeport’s Blends Gallery Thurs March 28, 5:30-9pm.

Until the entire list of shows is loaded, you can see the programs list on Spotlight’s SoundCloud page here.