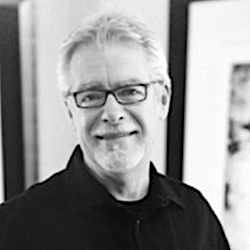 Gregg Welz, a lifelong resident of Norwalk, Connecticut, is a conceptual artist who configures cut and folded pieces of drawing paper into repeating patterns, creating gradations of light and cast shadow. From early watercolor lessons at the age of twelve to an art and design education at Pratt Institute in Brooklyn, New York, Welz has continued to experiment artistically. He notes that his imagination is influenced by geometries found throughout the environment, both natural and man-made. â€œI am drawn to this abstract process as a means of expressing the visual symmetry around me: architecture, water patterns, or stone walls, for instance,â€ says Welz of his cut paper practice, citing Sol LeWitt and Louise Nevelson among his sources of inspiration. â€œUsing the grid confines or contains the composition to its singular space; I envision the boundaries broken through to infinite scale.â€ Utilizing paper with texture and weight is important to the artist; he likes the tactile feel of it. While he sometimes works in colored papersâ€”rich crimson, Mediterranean azure blueâ€”many of his recent pieces are minimalist confections of white on white. The work is delicate yet crisp, the patterns graceful and angular, as intricate as a classical symphony and as elegant as pleats in couture fashion. The folds of the paper in these three-dimensional works form shadows that make one more layer of pattern and color; even in the monochromatic compositions, the shadows cast a variety of shades. â€œWhen I first created the paper cuts series, shadows were a pleasant after effect,â€ Welz notes. â€œAs my work develops, I look forward to what the shadows may reveal.â€ Welz compares cutting paper to preparing a palette of mixed paint, and his studio tools are blades instead of brushes. He then lays out the grid and completes each square, over and over. Each piece of paper has been scored, cut, folded, and a fixed with a riser; completion can take several weeks of repetitious practice. The artist enjoys viewers' reactions to his work and is often queried on his patience. Paper Cuts includes works such as Up and Over, a perfect square composed of 169 smaller squares, each its own tile of origami-like folds. The detailed shapes Welz has folded into the creamy white paper conjure endless associations: tiny kites, ornate frosting roses, snowy peaks, experimental architecture, spinning pinwheels, scales on a pale fish, or facets in a diamond. Simultaneously stimulating and meditative, Welz's cuts and creases form individual universes that are nuanced when seen from any focal point. Viewers will find something new to contemplate with each look.

Westport Museum for History and Culture