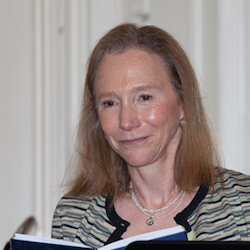 From early childhood Margaret drew and painted and eventually attended New York City's H. S. of Music and Art (now La Guardia High School) as an Art Major. From there she matriculated at Cornell University and received a B. A. in English. She went on to study architecture in graduate school and was awarded an M. Arch from Columbia University. Margaret worked in NYC as an architect for ten years, doing commercial and residential projects, then moved to Milan with her husband, David Weisbrod. While there she designed and oversaw construction of a large apartment renovation in the Castello Sforzesca area. In 1985 the family returned to the US and settled in Greenwich, CT where, after raising three children, she and her husband still reside. Twelve years ago, after being in an architectural partnership for many years, Margaret decided to focus again on art. Beginning with pencil, she explored many mediums and today works primarily in pastel and oils. She has studied at the Silvermine Guild with Mary Beth McKenzie, Jesus Emmanuel Villarreal, Kirill Doron, Tom Brenner, William Nathans and Dean Fisher, and at the Greenwich Art Society with Nomi Silverman and Carol Dixon. She has studied at the Art Students' League with Ellen Eagle and Michiyo Fukushima also took part in an ASL workshop with Ephraim Rubenstein in Florence, Italy. In 2015 Margaret has granted a residency at the Vermont Studio Center. She has exhibited and won awards in numerous shows and her work is represented in various private collections in the U. S. Her paintings were included in an exhibit of Greenwich Art Society members at the Bruce Museum and she had two pieces in the show â€œYour Face Squaredâ€ at the Museum. Her drawing, illustrating a poem by Marybeth Little Weston, is included in the poetry collection â€œWomen's Voices of the 21st Century: Experiences that Shape Womenâ€, The Argian Press. Two of her illustrations accompany Chapter1 in the short story, â€œA Curious Day in the Life of Joe Bascombâ€, serialized in The Greenwich Time. The chapter was authored by M.J. Rose and published in the newspaper on January 12, 2014. She is a member of the Greenwich Art Society, the Art Society of Old Greenwich, the New Canaan Society for the Arts, the Rowayton Arts Center where she has Exhibiting Member status, the Greenwich Arts Council, where she is a Vice President, and the Greenwich Branch of The American League of Pen Women where she has been a co-chair of the Art Division.